The patch is live! Garrett and Kyle walk you through all the goodies inside to prepare you for your weekend’s Heroes-tastic adventures. Hots is in the public eye this week as not only Blizzard, but other news sources have been talking about our humble little game. Next comes the big patch rundown. Week one playtesting feelings on the reworks and covering the ins and outs of all the balance chances. Just ban Valla (unless you’re GM quality Zeratul is ready).

Still looking for someone who knows CSS for HOTSlogs

HotS is getting promoted by Blizz again!

Can’t remember the last time I got an email promoting HotS. 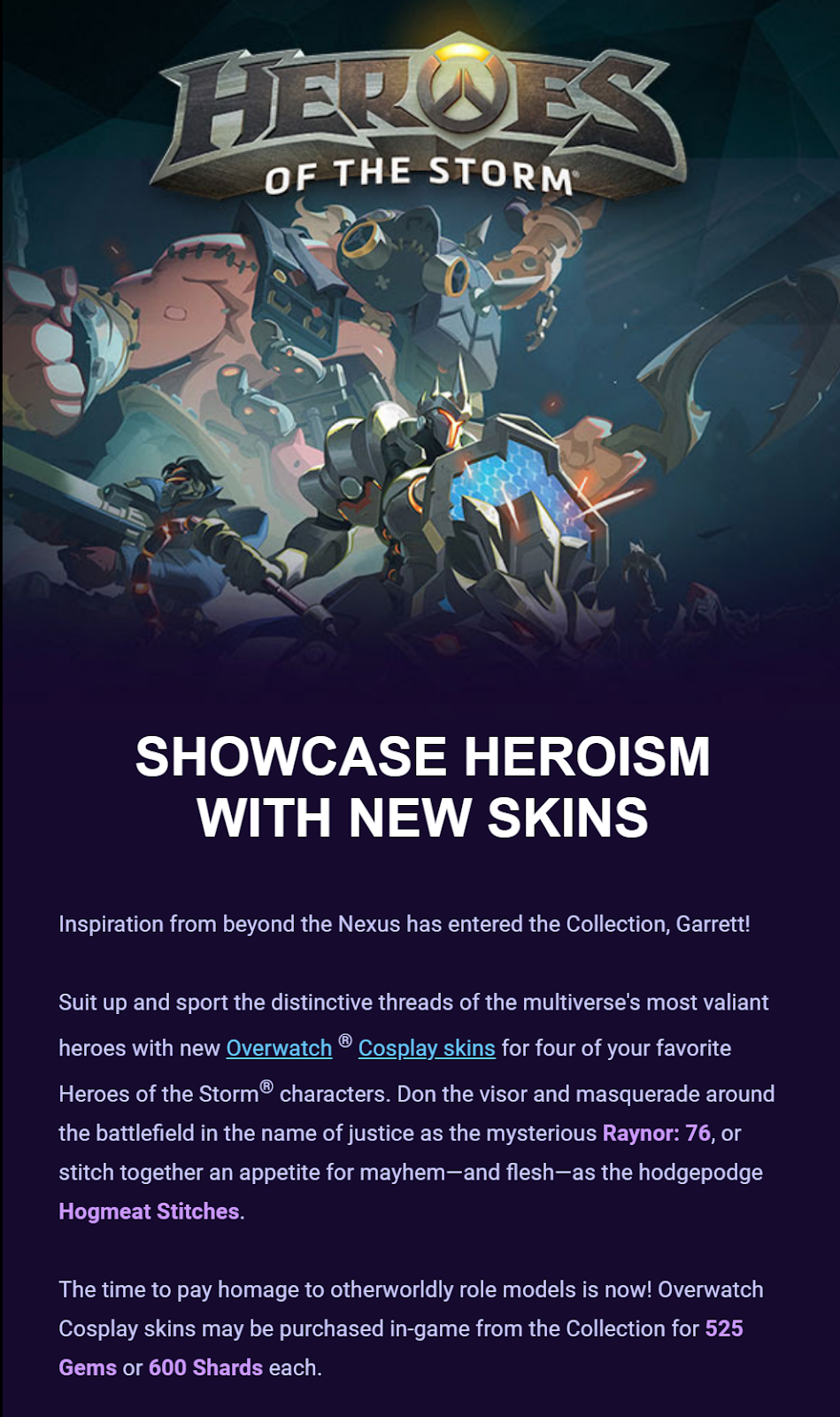 Senior artist Andrew Kinabrew  Article on Heroes of the Storm:

What’s a wacky Heroes skin pack you’d love to make some day?
I hope that we can do a shark-themed pack some day. Sharkhaka and Hammerhead Greymane would be a lot of fun.

Brigitte:
We love Brigitte, and she would have been a cool skin, but we fell in love with Reinhardt’s armor when we first laid eyes on it, back before his debut in Overwatch.

Experience Globes will no longer time out after 6 seconds. Instead, they will shrink and become worth 25% of their original value for an additional 39 seconds.

Developer Comment: We are continuously looking for gameplay changes that make the game more fun while also educating the player base. This change does both - giving teams that missed the crucial 6 second timing window a chance for partial redemption while, at the same time, showing players where they are missing valuable experience via lane soaking. The team has been enjoying how this plays internally and are eager to hear your feedback.

Do you think the nerfs to waveclear are made with the XP Global change in mind?

Will trickle xp be removed?

Developer Comment: Mei is still slightly overperforming at all levels of play, so she gets a boop from the nerf stick.

Developer Comment: D.Va’s Mech is still slightly more powerful than we’d like, and it’s giving D.Va the edge over other Heroes before considering her capabilities with Self-Destruct and Pilot mode. She also has some talents with some suffering pick rates that we hope are now more attractive.

Developer Comment: Hogger is inching closer towards what we feel is a healthy state of balance, but the PvE efficacy that Hogg Wild offers is still keeping him above many other Bruisers. We think increasing the baseline damage and re-focusing the Rage bonuses towards PvP only will help in this regard.

Developer Comment: Sonya has been overperforming, so she is getting a sizable decrease in strength. We're trying something a little different with Shattered Ground by separating its existing benefits based on its target, and we hope this change is more interesting than simply numerically reducing its bonus.

Developer Comment: Previously, The Lost Vikings had received a significant buff to their base stats to assist in their adjustment to experience globes. The Lost Viking players have since adapted wonderfully, so we're halving the impact of that buff, while assisting a few weaker talents.

Level 16 - Impatience Is a Virtue [Passive]

Developer Comment: Lucio has become a dominant force in the hands of skilled players. We’re happy we’ve been able to make High Five a competitive option, and so we’re simply targeting Lucio’s personal survivability. We’ve yet to get players to play their Boomboxes, but we’ll keep trying.

Developer Comment: We don’t dislike Uther being capable of playing a frontline role, but we do believe he’s doing so a little too freely. This should make it a little more expensive for Uther to rush into danger.

Developer Comment: Azmodan's PvE-centric talents are proving a little stronger than we'd like for how easy they are to execute on, so we're shaving off a little bit of power across the board and greatly reducing the cast range of Demonic Invasion. We're also normalizing Globe of Annihilation's level scaling since his Q builds are underperforming at most levels of play.

Developer Comment: Falstad’s last changes have certainly shocked the Nexus, unfortunately in part due to some regrettable bugs. With some tuning to keep him grounded, and a new coat of paint, Falstad is ready for his next flight.

Developer Comment: It’s been a minute since we’ve seen Junkrat blow some stuff up. Get at it!

Developer Comment: Tassadar's Q build is underperforming at higher levels of play, so we're bumping him up slightly in that regard. The reduction in channel duration doesn’t change how quickly the beam begins to travel, and instead just allows Tassadar to act sooner.

Rep. Dong-soo Lee, a member of the Democratic Party and South Korean parliament, proposed the "Heroes of the Storm Law", along with a group of other politicians and lawmakers.

On 18th May 2021, Rep. Dong-soo spoke in the parliament, where he explained why he wants to make these changes and why they are important for the future of the esports industry in South Korea.

He explains that these kinds of unilateral decisions can seriously infringe the rights of numerous other parties involved in the competitions, including esports organisations, pro players, casters, and other people involved in the production of such events.

As one of the most infamous examples, he brought out the abrupt termination of the Heroes of the Storm Global Championship (HGC).

The HGC saw a sudden end in December of 2018, which effectively ended the game's pro scene.

This came just weeks after a lot of people involved in the competition, including players, casters, and even developers, were reassured that the next season of the HGC was going to be bigger than ever before.

And this is exactly the type of situation which Rep. Dong-soo Lee wants to prevent with his proposal. The bill would require that publishers or others who own the copyright of a game will need to inform at least several months in advance all of the involved parties if they are planning to cease operations of an esports competition.

In this way, the rights of teams, players, casters, and viewers will be protected as they will know the exact state of the competition, and can prepare for their future accordingly.

Rep. Dong-soo Lee emphasizes that many esports players are in their teens or early 20s, which is a crucial time for a person's development. Many of them are dedicating their life to a game they play professionally, and a sudden ending of competitions (and thus their careers) can have severe and long-lasting consequences.

"In particular, professional gamers are investing in their teens to early-mid-20s, which is the most important period in a person's life due to its nature, and as there are not a few minors, institutional protection measures must be introduced," Dong-soo stated.

Hots has gone back and forth on talent philosophies so which do you prefer:  Being able to make a "Q build" with a Q talent on most tiers or making a tier nothing but Q choices? Show your work.

Thanks to our Patreon producers Declan H, CheezyBob, Chris K, & Shawn B. ITN shirt at shirts.amove.tv. Coffee mugs and glasses are over at etched.amove.tv.